Archetype Wrestling » Fear Factory 2 » The Fist Vs. The Storm

The Fist Vs. The Storm 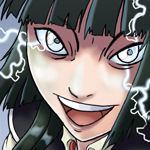 Dark plumes of smoke and purple flames fire about along the entrance ramp, as sparks rain down from before the entrance. As the sparks fade, a woman's masked face can be seen beyond the pyrotechnics. It's Madam Snapshot, the Fist of Evilution.

The crowd is fairly hostile toward her, as her affiliation with Evilution hasn't exactly made any friends. She seems largely unaffected by their jeers, after all the plebs wouldn't understand the freight train of thoughts that guide her path. She strolls down to the ring, microphone in hand, and glares at the spectators. Their frothing mouths shouting out obscenities and slurs that roll off of her like water off a duck's back. She slowly raises the microphone to her face, and pauses for a moment before she speaks.

The crowd immediately launches into more vitriol, and she is gracious enough to let them tire themselves out before she continues.

Snapshot : "Tonight, I face a man with whom I have a great deal of respect. A man, as I see it, who is the PERFECT candidate to determine if I am worthy of my aspirations. A man who was the greatest Interpromotional Champion we've ever had. That man, is Blake Lawson."

Whatever noises the crowd makes now is irrelevant, as Snapshot decides to roll through this while her momentum is good.

She pauses, as the crowd starts chanting such colorful things as "Snap Can't Win", "Girls Don't Fight", and something about her father beating her... That last one is so ridiculous that I can't even write it.

Snapshot : "Blake is a fierce competitor, regardless of what my fellow Evilution allies would say. Even if they believe themselves to be better, I still think it's worthy of investigating what makes a man like Blake tick. What made him unstoppable back then, what made him the runner up to our Battle Royale, and what can I take from him in our fight tonight to use against the current IP champ... Ugh, a pop star? Really? I... Just... It just makes me so mad that a title that used to have such legitimate prestige fell to a barbie doll!"

You can actually hear her fist tighten around the microphone as she thinks about it.

Snapshot : "If the only reason the peons in the arena cheer for you is the off chance your spandex top might fly off mid fight... And make no mistake, I've heard the 'music'. If I wanted a screaming, no talent hack shrieking uncontrollably into adolescent lyrics, I'd record Nedman shouting obscenities at Paprika after another choice word about Ireland or Scotland or whatever he's from..."

Chants of "She's Snapped" start picking up a bit of momentum. She looks around the arena, the chant really taking off. She looks like she's a bit rattled by it before she takes a deep breath and loosens her grip on the microphone.

Snapshot : "As I was saying. Tonight, it's Blake. If I lose focus of that, I'm surely done for before I began. So, I think our fight is next anyway. Blake Lawson? Come on down!"

[[Blake, if you wanna take a step in with the words, feel free. Otherwise, I suspect others might step in your stead. lol ]]

Posts : 38
Join date : 2014-11-17
'From Heads Unworthy' by Rise Against hits the PA system and as such "The Snowstorm" arrives. Blake Lawson comes through the curtain, a grin on his face as he looks at Snapshot down in the ring. He nods out of respect for her as he makes his way to the ring, climbing in and grabbing a microphone in order to get right down to the brass tacks.

Blake Lawson: "I am a man of many words and I've fought many different opponents. I've got a million bad things to say about a million different people but for you... Snapshot... I've got only respect.

People might be surprised to see me, a guy with a god complex so big that even all the greek and norse gods put together couldn't even compare to it, handing praise out to someone who isn't on my side in a match or something. You might be part of Evilution and I might be part of The Establishment but this isn't about that, it never was going to be.

This is about the best facing off against the best. I take great pride in being the only man you couldn't put down with a Neo 8 Hit Air Combo, and I don't intend to relinquish that tonight. You have something to prove to yourself in regards to your quest for a championship that I let a "pop star", and lesbian girlfriend of a woman giving birth to my baby, have so she could get over the death of her best friend that I caused...

Anyway, you might want to prove that you deserve the Interpromotional Championship that I once coveted so dearly by beating me tonight... But I've got to prove to myself that I'm not just the runner up to Adam Nedman here."

Blake looks around as the crowd chants 'You're Number Two' over and over in reference to him losing to Nedman in the battle royale.

Blake Lawson: "Even though the world didn't see it last week, I lost a fight with Mauler and Paprika before I even climbed in the ring thanks to Joe Donuts. So tonight I'm not just out here to win a match... I'm out here to redeem myself. To show everyone I'm not just some psychotic drunk and that I really am the god damn best.

I don't care if you step up your game to levels even you've never seen before Snapshot... I don't care if Mauler and Cartwright come out here and shoot me in the chest before our match begins... I'm not going to stop until that bell rings and my hand is being raised in triumph.

I may respect you, and I may believe that you are better than everyone else around this place, but I'm prepared to put every last ounce of my body into this match and I'm going to win even if it kills me... And there's just absolutely nothing anyone can throw at me tonight that's going to stop me.

Not even The Fist."

Re: The Fist Vs. The Storm

Archetype Wrestling » Fear Factory 2 » The Fist Vs. The Storm