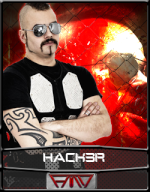 Hack3r (Real name Sam) is a young English man from a small town. Blessed with devilish good looks and natural athleticism, he has never been shy of confidence.

Several years ago Hack3r had moderate success during ATW's first incarnation but has been in retirement since its liquidation, keeping a low profile and enjoying a quiet life. After being approached by Joseph Duplantier, he has decided to come out of retirement in an attempt to regain some of his former glory.

The man is arrogant and self centred. Although prone to self serving acts, he has been known to be altruistic and kind. The circumstances that influence this good behaviour may as well be an enigma.

Hack3r is constantly toeing the line between face and heel and can act in unpredictable, inconsistent and sometimes illogical ways when posed with a problem.

» An old story from long ago.
» Rise of the Wolvian