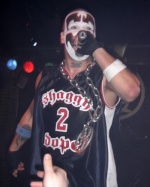 Hailing from the rugged Ghettos of Southwestern Detroit, Shaggy 2Dope has had a long run in the wrestling world winning titles in both singles and tag competition. Labeled as a Violent Psychopath with a reputation on mutilating and injuring his opponents he is to be feared. Numerous reports of seriously injured camera men, interviewers, and Superstars he has left a trail of blood and gore behind him. He is as sadistic as he is calculating with his moves. Be warned he has been known to attack with countless weapons one of which being his hatchet.